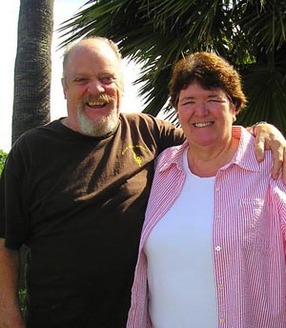 As a young girl of 8, I accepted Christ and got my first glimpse of a missionary nurse serving children in Africa on a vacation bible school slide show. I made a promise to myself and to God, "Someday I am going to be that nurse."

I grew up, became a registered nurse and married Ted Favor. Ted has a BA degree in music education with a minor in theology from Western Baptist College. We started our life together and I worked 23 years as an RN but always knew I had a call from God.

In 1990 Ted and I fell in love with the Mexican people on an outreach mission’s trip to Ensenada. We sold all our worldly goods and left permanently for Mexico in October of 1991 and have never looked back.

Neither of us spoke Spanish but that didn’t stop us. We were invited to join Pastors Luis and Mimi Ojeda in their tiny little church of Mt Zion high in the hills of Ensenada. I volunteered in a clinic for the poor which was owned and operated by Dr. Ramon Vidauri. Ted served as Assistant Pastor at Mt Zion Church. For four years we submitted to the leadership of these wonderful Christians, learned the Spanish language and learned to love and respect the Mexican culture.

Little did I know all that would change on an outreach tailgate ministry into the migrant camps of the Oaxacan Indians, I began to see the handicapped children of Mexico. This segment of society was surely "the least of these" that Jesus had spoken of in the Bible. They crawled in the dirt and mud unable to walk. They often fought with the camp's dogs over scraps of food. They were dirty and neglected. They were a shame to their families who thought that to have a child like this was a disgrace. They were abused in terrible ways and not regarded as the precious gifts that Jesus had intended for them to be.

The pull on my heart was greater than on Ted's at the time. I wanted to take them all home. Ted, being more practical, allowed one baby at a time. So I began to try to teach the mothers how to care for these tiny and neglected waifs. All the while praying, "God, change Ted's heart, or take this burden from my heart.”

After 4 years of prayer, and circumstances orchestrated by God, Ted and I learned about a small boy who was being kept in a cage by his parents. We traveled high in the hills and found an elderly couple who were goat herders. They indeed had an eight year old boy that they kept in an old outhouse because the boy was mentally retarded and wandered away while they were out tending their flock.

This precious child was named Gabriel. He had epilepsy and was tied into a feed sack at night so he would not hurt himself when he thrashed around from nightly seizures. Ted took one look at the situation and said, “Well he sure can't live here." and Gabriel House was born.

The Lord has given me the desires of my heart. Over the years Gabriel House has accommodated as many as 50 children at one time. We usually have 30+ children. All the children are at the main house while Annie and Alejandra live with us.

With all the children the Lord has given us and our commitment to them that they will always have a home my vision for Gabriel House includes purchasing the entire cul- de- sac where a state-of-the-art facility for the children can be built, that can accommodate even more handicapped, and immune deficiency affected children. The purple house across the cul-de sac could become the learning center for the boys, and with a second floor added, Ted and I can realize our vision for a teaching school for care of the handicapped and dormitories for visitors and volunteers.
In 2007 a down payment was donated for the purchase of the main house, and by 2008 another generous donor gave a down payment for the white house at the end of the cul- de-sac next to the main house.

Donations have been coming in to purchase the empty lot on the cul-de-sac and we trust the Lord that we will also be able to purchase that property. That would mean the children of Gabriel House will have a home for as long as they need it. Isn’t that what we want for all our children, a permanent home? The Lord loves these kids and is providing for them. Please join us as we care for “the least of these.”